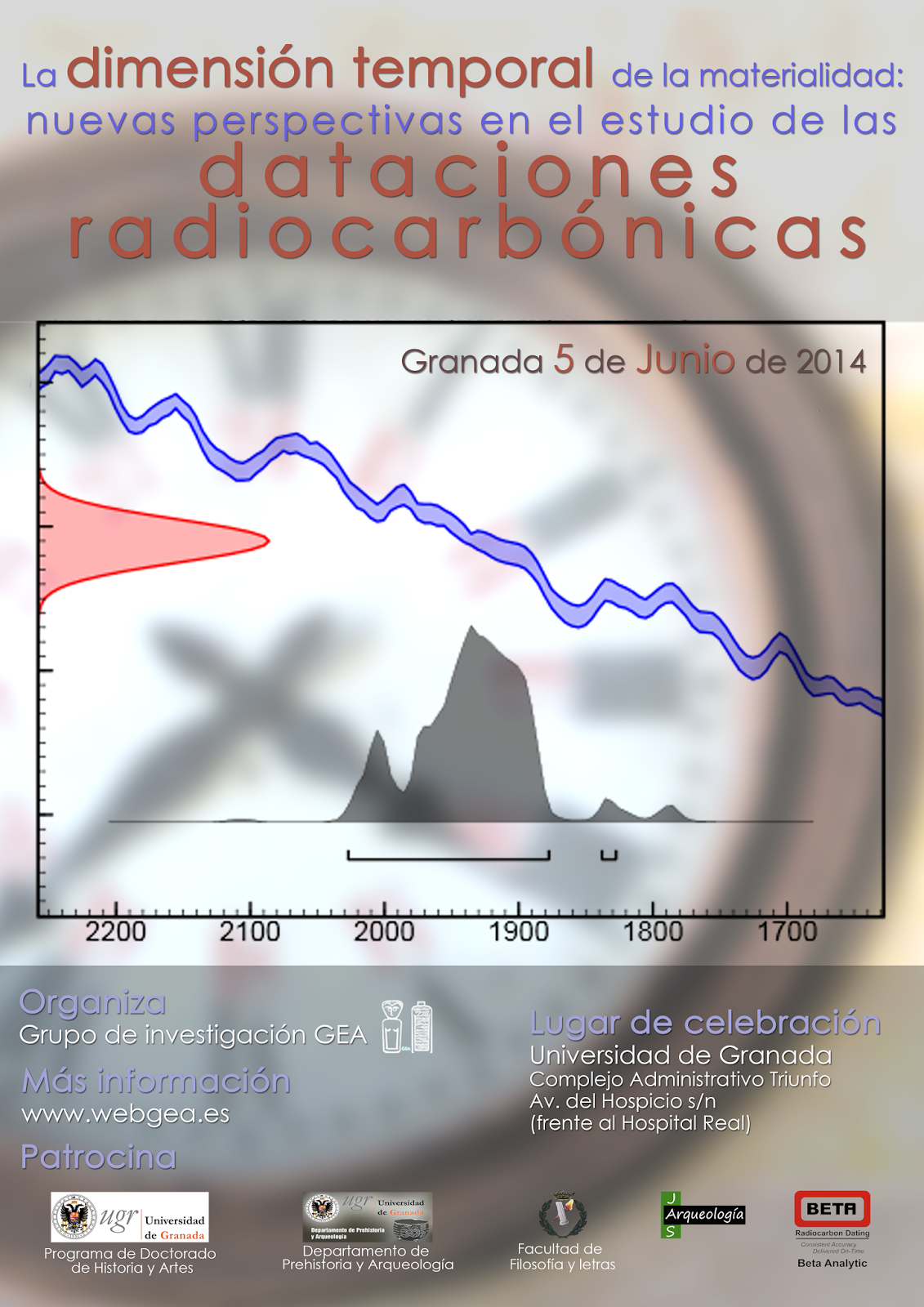 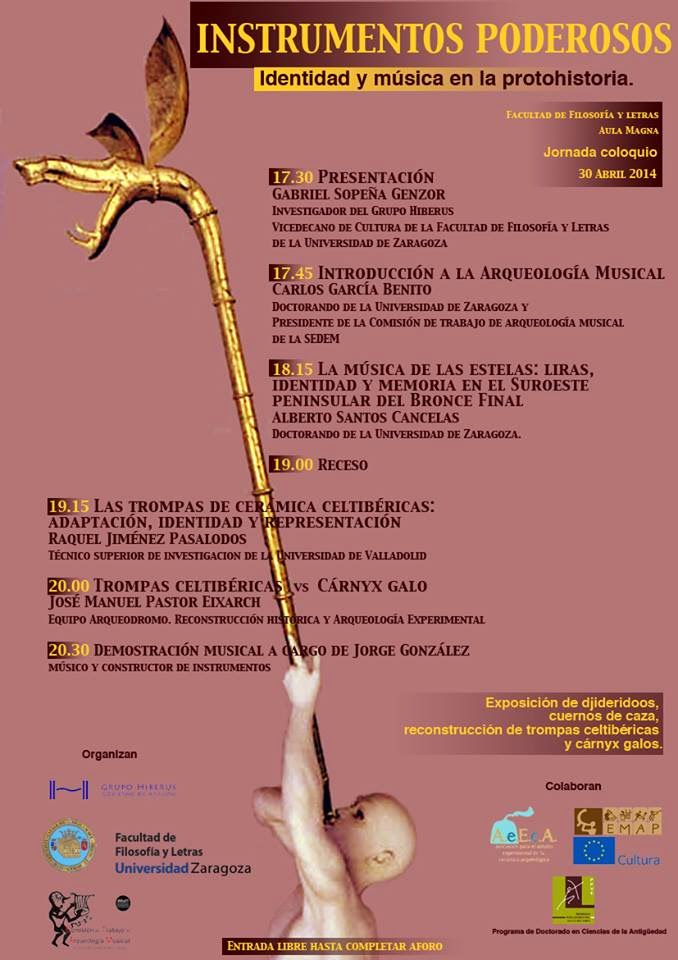 
CULTURES OF STONE
INTERDISCIPLINARY RESEARCH ON THE MATERIALITY OF STONE

We welcome proposals drawing from different fields to understand the involvement of people with stone and its significance, from any period and geographical context, around these themes:

- The moving, trade, and exchange of stone
- Sensory perception and engagement with stone
- The reinterpretation of stone through experimental approaches
- The ritualistic and symbolic meaning of stone
- The transformation of stone from its sourcing to its final deposition
- Stone and monumentality

Abstracts of 300 words for papers and posters should be sent to  culturesofstone+abstracts@gmail.com
For details on submission, conference registration and programme please visit  http://culturesofstone.eu.pn/

On behalf of the Cultures of Stone conference committee: 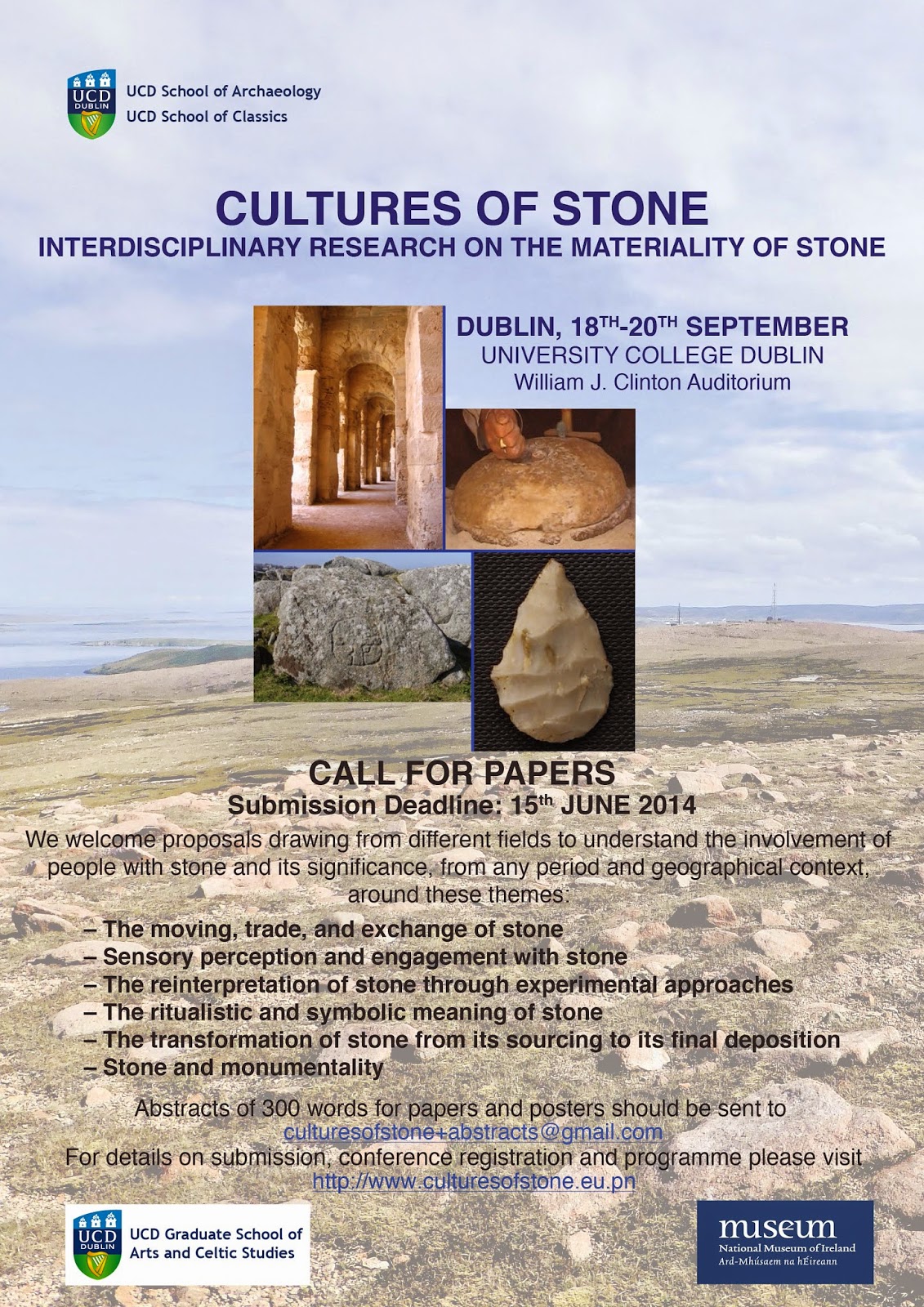 You will find enclosed information on the International Conference Heritage and Conflict. Lesson to safeguard Syrian Heritage, which will be held in Santander (Spain) in April, the 23th and 24th 2014.

In this conference, experts from several countries in the Mediterranean area (Bosnia and Herzegovina, Lebanon, Egypt, Syria, Iraq and Libya) with hands-on experience in safeguarding cultural heritage during the conflicts which devastated their countries will discuss the possible measures to be taken to reduce the risks of the damage to Syria’s heritage as well as measures to fight the illegal excavations and illicit traffic in artefacts during the Syrian conflict.

Those interested in participating in the Conference can send their names and coordinates to the following address: heritageandconflict@unican.es. More information can be gathered at the webpage: http://www.unican.es/iiipc/investigacion/HeritageandConflict.htm 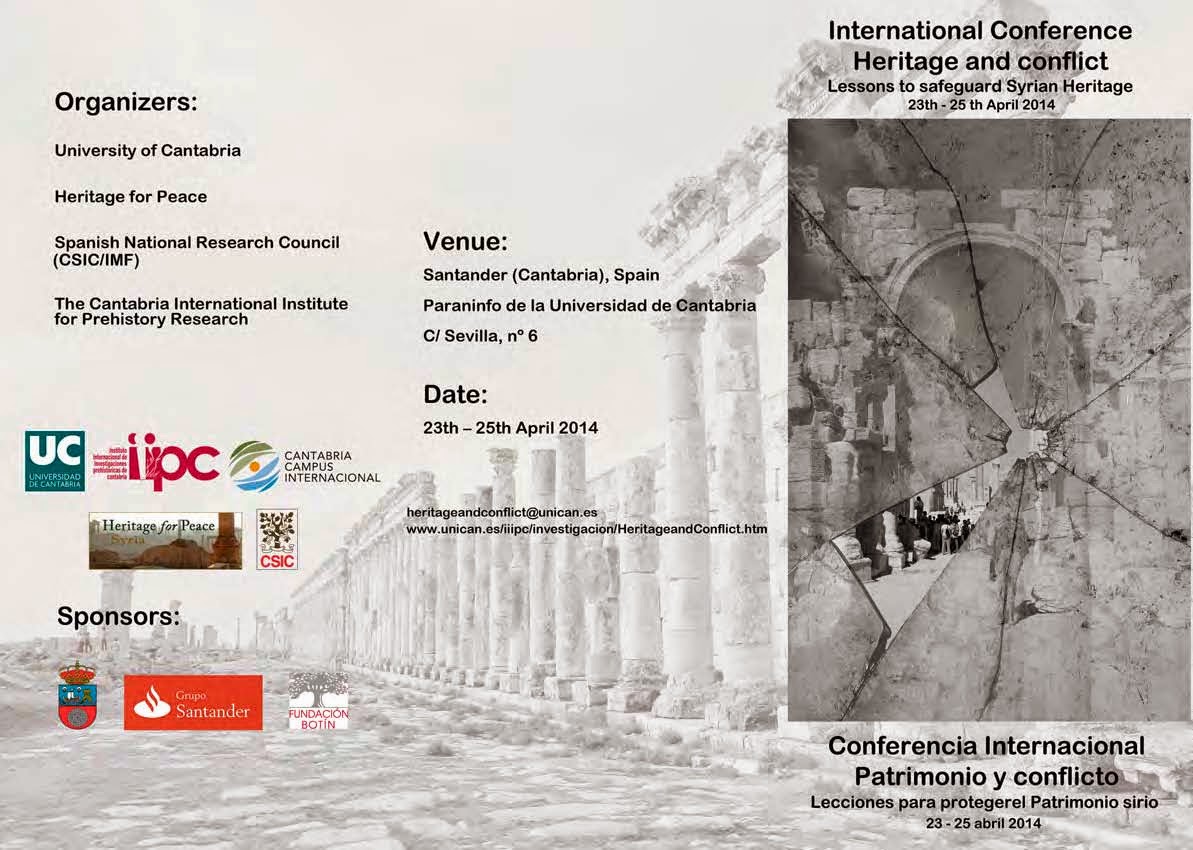 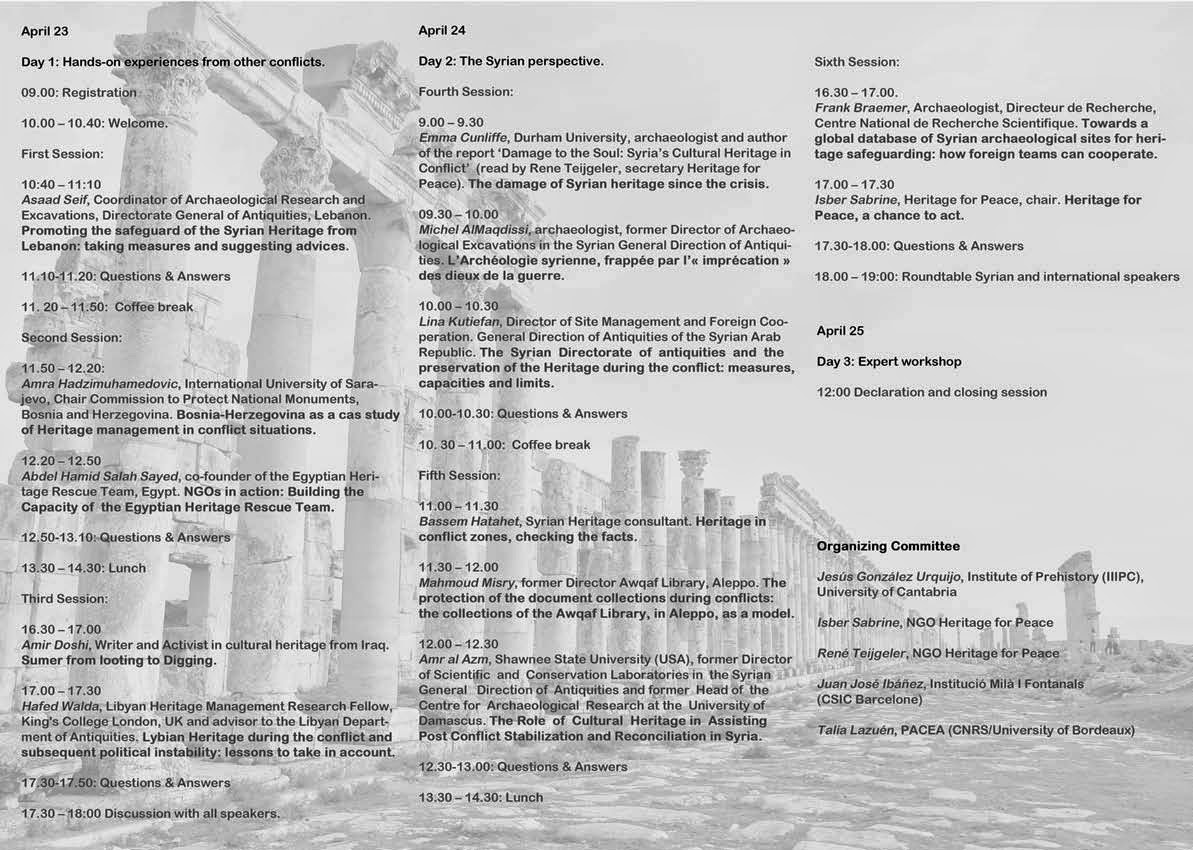 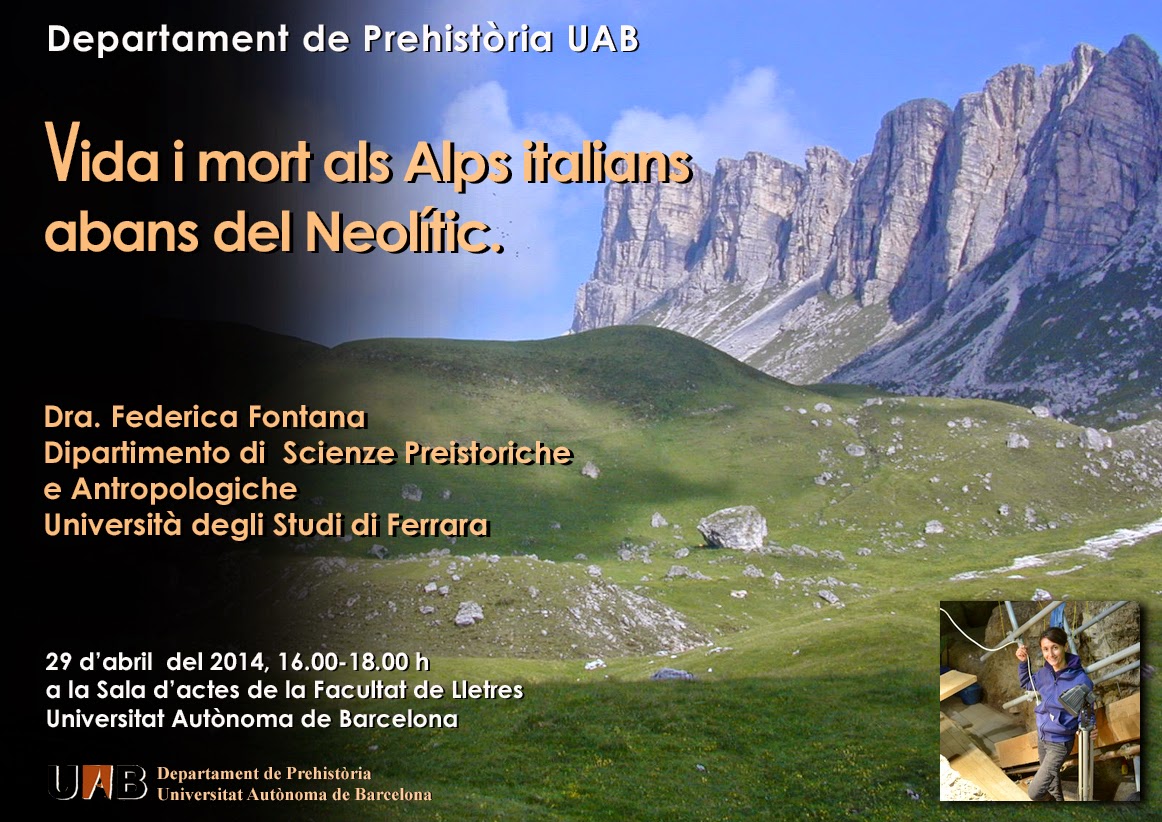 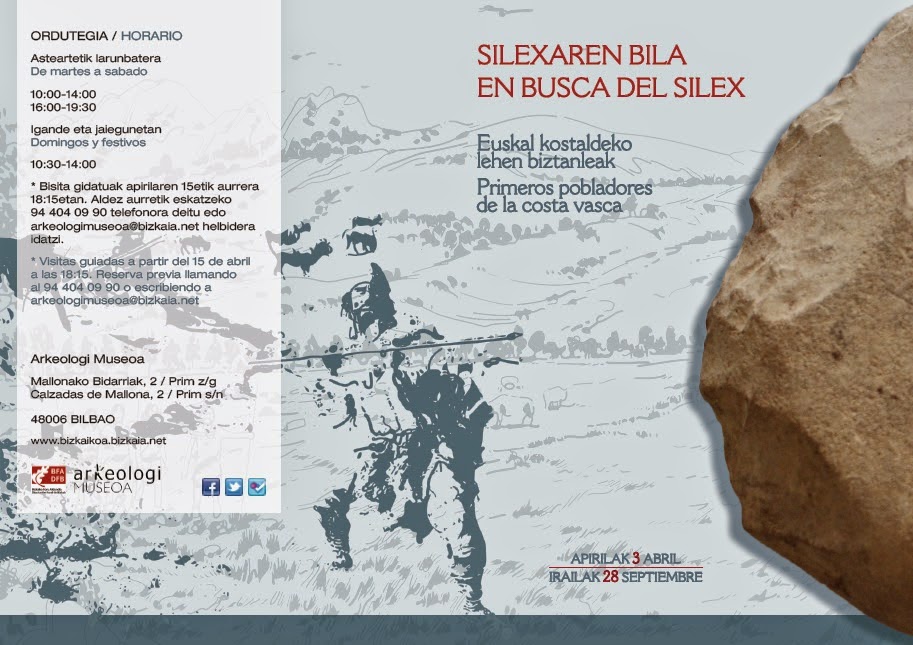 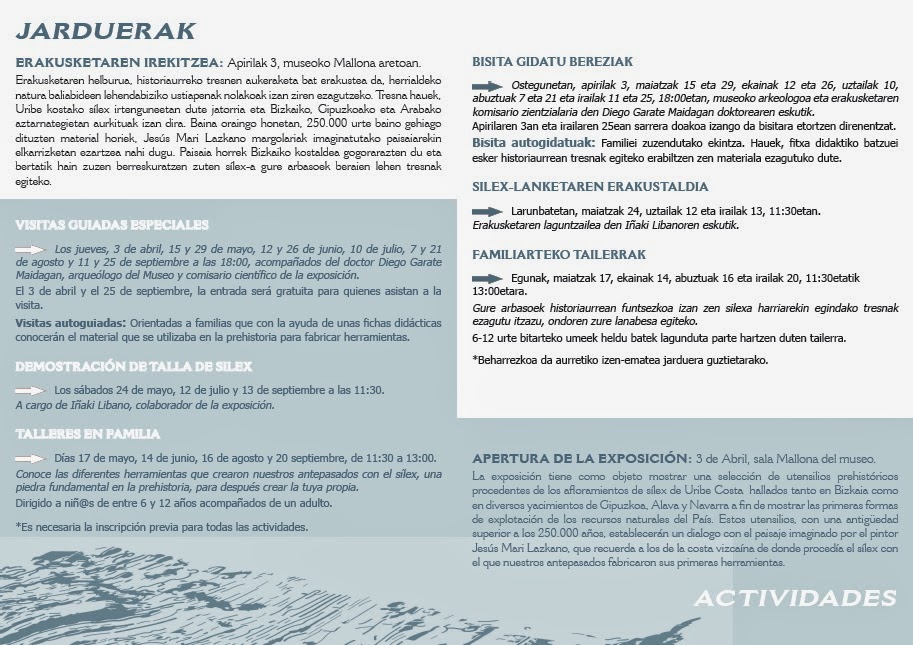 We are please to announce that due to the many requests we have received, we are extending the deadline for abstract submission to the ICREA Conference on Small-scale Societies and Environmental Transformations: Co-Evolutionary Dynamics. The new deadline is April 15th and confirmation of acceptance will be notified by April 30th.

Carla
(on behalf of the organizing committee)
www.s3et.net
organization@s3et.net
No hay comentarios:

We are organizing a session for the XVII World Congress of the International Union for Prehistoric and Protohistoric Sciences (UISPP) which will take place in Burgos (Spain) from the 1st to the 7th of September 2014:

All conference papers must be sent to each session organizer through the congress web site (www.burgos2014uispp.com) by the 30th of April 2014 with the following information (in English or French): Title, author's name (or the responsible person in case of teams), e-mail, reference institution, abstract and keywords. Congress participants need to inform the organization concerning the session in which they want to be included (communications and/or posters) by May 31, 2014. As session coordinators, we invite you to participate in the proposed session, and we would be very pleased if you would accept this invitation.  We consider to publish the papers of this session in a special issue of an internationally reviewed journal.

Should you have any questions, please let us know.

Thirty years ago Danielle Stordeur organised a workshop on hafted tools in Lyon (France): “La main et l’outil: Manches et Emmanchements Préhistoriques”. The communications from that workshop were published three years later in the series Travaux de la Maison de l’Orient. On the occasion of the forthcoming UISPP Congress, to be held next September in Burgos (Spain), we propose a new session on prehistoric hafted tools. Propositions should address new insight unavailable at the time of the previous conference. We encourage communications on the following topics:
•Presentation of hafted tools, usually only possible when the haft itself has been preserved in very specific sedimentary contexts or because the handle has been produced in less perishable materials such as bone and antler.
•Use-wear studies describing microwear produced by the haft or related to the use
of a hafted tool
•Analysis of glues used to fix the tool to the haft
Residue studies on stone tools that provide insight into hafting
We envisage expanding our knowledge of hafted prehistoric tools and their complexity and, finally, of the human communities that produced and used them.

From an archaeological perspective, mountain environments offer a very wide and complex research field, and our scientific interest finds its origin in the recognition of the fundamental role that mountains have always played in human history.

Through the millennia, mountains were climatically, geomorphologically, environmentally and also culturally shaping the human landscape. In a coarse-grain geographical scale, mountains have a deep influence on not only by their local climate and immediate vicinity, but sometimes in areas thousands or more kilometers away. Examples may be easily found in the different cultural processes occurred between the northern and the southern Alps, in the remarkable environmental differences of the western and eastern flanks of the Rocky Mountains/Andes, or in the consequences that the formation of the eastern African ridges had in the evolution of our species.

In a fine-grain geographical scale, the presence of mountains deeply influence the peopling strategies in a specific territory. A very high percentage of the Earth’s fresh water originates in mountains and most of the major rivers are fed from mountain sources. The ecological relationship between highlands and lowlands is well known and its complexity affects local species. Moreover, the morphological variability of mountains (folded, block, volcanic, plateau, etc.) has consequences for the evolution of ecological niches, biodiversity and, consequently, the exploitation of natural resources by human societies.

The HOME Commission, formally defined in 2012, involves scholars interested in developing, sharing and promoting knowledge about past human groups who inhabited mountain environments in any region of the Earth. Looking at the mountains of the world, any archaeologist who may be interested in being active member of the HOME Commission is warmly invited to join us to promote cooperation among institutions that investigate mountain environments and their influence on humans.

The HOME Commission will organize two sessions during the XVII UISPP Conference: a general one (A6a) and a thematic one (A6b). The proposals - oral or poster presentations - will be evaluated by the scientific committees by April 2014.

This session addresses the topic of human presence and activity in mountainous environments on a global and comparative level, and thus encourages and welcomes contributions from all mountain regions and from all continents. The aim of the session is to establish a comparative methodological approach to the archaeology of mountain environments, and to enable a dialogue encompassing a broad variety of geographical settings – Himalaya, Caucasus, Carpathians, Alps, Scandinavia, Rocky Mountains, Andes, etc. – sharing a common research question: early human presence.

In order to structure this dialogue, we propose three core themes around which the contributions
should evolve:

a) Strategies of Site Detection
b) Hunter-Gatherers and the Transition to Farmers
c) Exploitation of Lithic and other Mineral Resources.
Papers can be presented in English, French or Spanish. Contributors should send a title and an
abstract (300 words max.). Please send the proposal to: Stefano Grimaldi (University of Trento),
stefano.grimaldi@unitn.it and include as reference: UISPP-General session A6a.
Scientific Committee

A.6.b - “Resource exploitation of the Pyrenees from the first human occupations to the end of
protohistory: a behavioral perspective”.

This session focuses on general aspects of the behavior of human societies in the Pyrenees during Prehistoric and Protohistoric times. The aim of the session is to address economic, social and cultural issues which conditioned human settlement in this mountain environment, dealing e.g. with the analysis of human settlement patterns, resource management and economic strategies, and relations between communities. Archaeological analyses integrated in broad environmental and territorial perspectives will be especially welcomed.

Papers can be presented in Spanish, French or English. Contributors should send a title and an abstract (300 words max.). Please send the proposal to: Xavier Mangado (University of Barcelone), mangado@ub.edu and include as reference: UISPP-Thematic session A6b.